When is a C Worse Than an F? 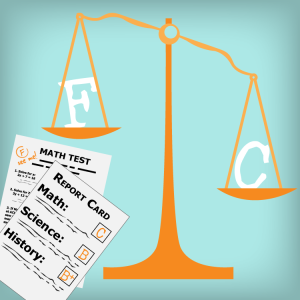 So you’ve just gotten your report card, or your latest test, and… you passed!!!!  Hooray!!  By the skin of your teeth, you passed. Now you never have to worry about that stuff again…right?  Wrong!  In math, that’s rarely the case.  Every layer of skills is setting you up for success with the subsequent layer.  So if you don’t have the previous layer at Mastery, then you’re going to struggle with the next.  It may seem like the teacher is doing you a favor when they give you the extra points to nudge you into passing.  Maybe you did some extra credit, turned in all of your homework, and showed up to office hours, because you needed that grade.  But if you don’t have the skills, you’re still in trouble.

The math curriculum in our schools is overly ambitious and “underly” rigorous. There is entirely too much information being shown at too fast a pace for most students to really GET it in the deep and lasting way that would truly support the next layer. So they move on with a shaky foundation and then they move on again with a shaky foundation and again and again, and then all of a sudden we all wonder why they’re hating math, or giving up on it, or trying their best and still failing.  A good practice-method would promote the opposite of this.  With the MFK practice-method, e.g., I take far fewer skills- the most important ones, the “desert island” ones—and we practice them with rigor.  People hear the word rigor and think “oh that sounds like hard work.”  It is, kinda, but it’s hard, DO-ABLE work.  It’s rigorous at the precisely right level for YOU, so it’s rigor that feels good, and that actually makes math EASIER.  When math becomes hate-worthily difficult, it isn’t because of its rigor, it’s because it has become un-doable.  When you’re being expected to do things that you haven’t been set up for success at, that SUCKS.  It’s because of LACK of rigor at the previous level that makes it insurmountably difficult.  The rigor of the practice-method will make sure you know it, and then it feels LESS difficult, not more.  And because the rigor is perfectly prescribed for your brain and for your level, I’ll say it again: it feels good.  Really.  It’s “fun”.  It’s not like Schlitterbahn fun, but it’s real bona fide brain-fun.  (This is a thing! Your brain is happy when it’s being worked in just the right way.)

At MFK, there are no grades.  You either know a skill or you don’t.  You don’t get to move on when you “pass”.  A ‘C’ doesn’t cut it.  70% does NOT indicate that you know something.  Neither does 80.  We practice it until you know it.  And because we’re practicing dozens of other skills simultaneously, it doesn’t get boring.  I’ll keep your brain awake!

So when is a C worse than an F?  Well, as far as skills go, always!  A C pretends that you know something.  An F is honest.  A C can set you up for future failure, an F can be a turning point.

Points to ponder.  Fun stuff to roll around in your head, or better: to talk about with your learner!
Talking with your learner about grades can be challenging for any parent, especially when a student is struggling in a subject. What tools do you use to talk about academic progress? What struggles have you had?  What victories?